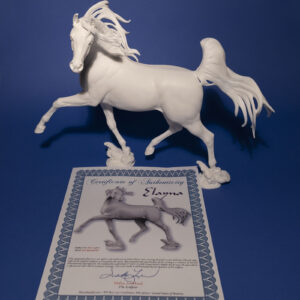 Avalon, a Half-Arabian mare out of Catalina and is the first collaboration between Debbi LerMond and Stacey Tumlinson. Debbi averages about one new sculpture per year. For the year 2020 it is Avalon, affectionately called, “Frankie.” Avalon is the first new sculpture since Elayna. Avalon is a 1 mold run and may be increased to VARA limits. Debbi’s trademark Magne-Click™ is back with included 2½” steel disc bases. Each Avalon is hollowcast cast and has a unique RFID serial number with a “Certificate of Authenticity” signed by Debbi LerMond & Stacey Tumlinson. Avalon is available for purchase now and shipping order is first-come, first serve. *Due to extra handling care and packaging precautions, shipping for Avalon is not free.

No Arbitrage Please: We do not allow the reselling of your Avalon resin before we ship your order.

Questions? Request a Call Back

a Half Arabian Mare, out of Catalina!

Elayna, full of an independent spirit, decided it was time to find a suitor and start a family. She was swept off her feet by a handsome Spanish stallion from the far away land of Andalusia. They took a boat trip to the Island of Catalina off the coast of Southern California where she had her first filly in the quaint coastal city of Avalon after which she was named. Avalon, who is affectionately called, “Frankie” is all grown up now and ready to start a family of her own. 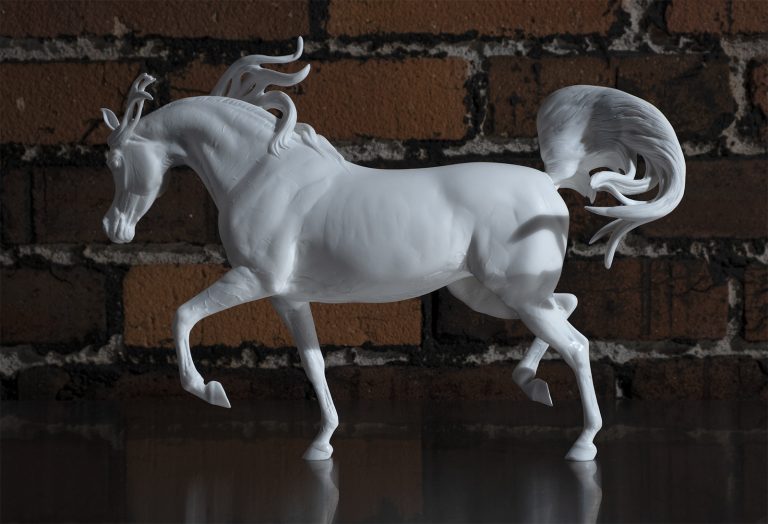 Avalon is the first collaboration between myself and Stacey Tumlinson. Since I originally cast the Catalina edition for Stacey, I received several castings to pay for the mold making. One of them, I CM’d and sent to Caroline Boydston to paint. I did quite a bit of work on her but did this over 5 years ago. I boxed her up when we moved across the mountain pass so she just stayed in storage for a few years. I finally hand delivered her to Caroline a year ago but when Caroline started painting on her, she said it would be better if I reworked her again. I had done the CMing when I was going through a lot of turmoil with the Sculpting Studio trying to get a high speed carver made. This turmoil translated into my art and the poor CM Catalina needed another make-over because her eyes didn’t line up properly. Caroline shipped her back to me and when I took a look at her after not laying eyes on her for over 4 years (she was boxed up through the moving) I thought to myself, “What was I thinking?” Before I cut off the head, I wondered how long was this going to take to realign her eyes again and then an epiphany hit me! There was an Elayna head laying on my workbench and I held it in front of the Catalina head to see if the size would work. It was a perfect match! So I cut off the head, pinned it onto the body and sent photos to Stacey. Avalon still had the CM tail which was very long and low. Stacey suggested giving her a flippy tail and I wholeheartedly agreed! So I cut off the tail, drilled a hole, inserted a wire and sent new photos to Stacey. She gave me an enthusiastic thumbs up! So Avalon was born and she morphed into “Frankie” Avalon because Larry gave her the name in the first place. While communicating back and forth on FaceBook, he gave a link to “Beach Blanket Bingo” and Frankie just stuck! When Larry was 12 years old, he won a trip to Catalina Island and got to explore Avalon which left a lasting impression on him.

At this point, Avalon still has a ways to go but I should have her finished and ready to mold in July! How exciting is this? She is large Traditional and will be at least a One Mold Run but could be more depending on how popular she become (not to exceed 200 in order to retain VARA rights). Each casting will be assembled by myself with RFID, hollowcast with reinforced legs and tail. She will come with Magne-Click and metal disc bases. I will partially prep each casting with no Artist’s Choice.

What Was I Thinking? 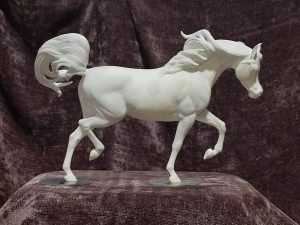 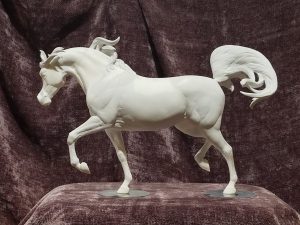 I spent many hours customizing Catalina over 5 years ago. After finishing her, I boxed her up to send to Caroline Boydston. At that time, Caroline wasn’t ready for her so she just stayed in the box. In January 2017, we moved across the Cascade Mountains to Plain, WA where she remained in storage for a couple more years. In the late Spring of 2019, I hand delivered the CM Catalina to Caroline Boydston, where she took these photos next to an uncustomized Catalina resin. After Caroline began to spray her she called me and said there’s a problem. She told me the eyes didn’t line up and needed to send her back so I could fix her properly. After I received her and unpacked the box, I thought to myself, “What was I thinking?” Since I had resculpted her when I wasn’t in the best frame of mind, my CM work looked hideous to me! The only way to fix her was to chop her up and start over. I had so much work into her already that I wanted to find a way to reduce the amount of time I would need to improve her to a point where I would be satisfied. Then it dawned on me that I already had a head where the eyes lined up and was quite elegant. The only problem was it was an Arabian head! That would mean changing the body to suit the head. Since the head is the most difficult part of the sculpture, I decided it would be less work to adapt the Andalusian body to a Half Arab body which would be a better match for these piece parts. The photos below are courtesy of Caroline Boydston, White Horse Studios.

Stacey said "give her a Flippy Tail ," So I Did!

The very long, low tail looked okay for an Andalusian but NOT for a Half Arab! It just drug her down and when Stacey saw the first photos, she asked if I could do a flippy tail? I was thinking the same thing and when she said this, it was confirmation that we were both on the same track. I had already started refining the body from an Andalusian to a Half Arab but with the old CM tail still on her, it just made her look worse. So, off with her head and then off with her tail! Now, the fun began to get some movement into a sporty little sassy Arab mare! 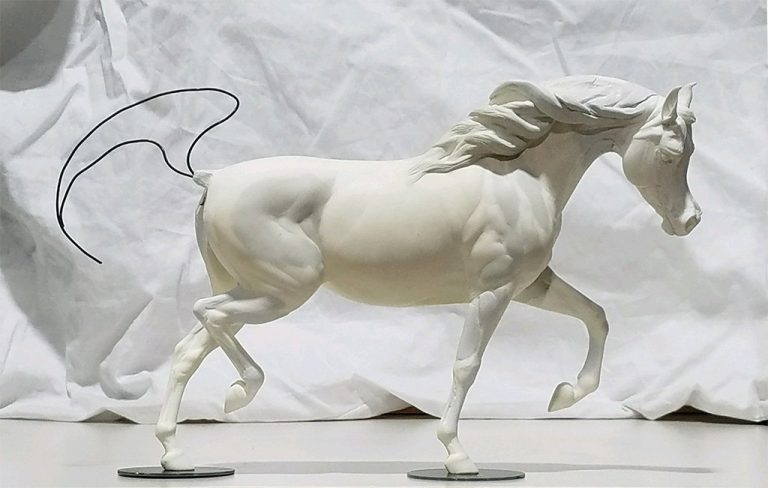 There are no reviews yet.

© 2000 – 2023 Horsemodels.com, Powered by Unbridled, LLC
Trademarks & brands are property of their respective owners.